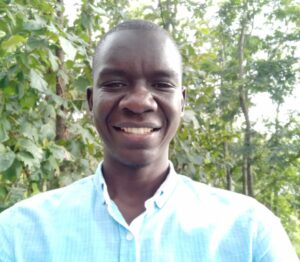 The Power of Giving Back

Daniel Osako spent his first years in a loving home in a small village in Teso, Eastern Uganda. “I was living a normal life”, he says. “With friends and family around me, a roof over my head, and my parents were able to give me and my siblings the basic necessities.”

But one day, his life turned upside down… “I was six years old when my village was attacked.” It was 1999, at the height of civil unrest and rebellion in the country. “I ran home from school to find my family. No one was there. Our food store was vandalized, cows, goats and poultry were all looted. My best friend Joshua was killed in the attack.”

All Daniel knew was that he had to get out. “I left my village and walked for days and days. Along the way, I saw the dead bodies of young and old. I feared greatly for my life. This experience affected me and haunted me wherever I went. If I saw soldiers in the distance, or people walking in lines, I would get frightened and hide. Every day felt like forever.”

Daniel had walked some 40+ kilometres, alone in the bush with swollen legs, when a truck carrying food items picked him up. “I was at their mercy, but they were kind and took me along the highway to the city of Lira.” They dropped him off at a primary school, a makeshift settlement camp for internally displaced people. “I met familiar faces there, but they only had time to care for their own children. I quickly decided to leave the camp. It was the most challenging moment in my whole life.”

Hungry and weak, Daniel joined the local street kids. “I feasted in the garbage bins and ate leftovers from restaurants for some years. I became a street child doing anything I could to survive from day to day in Lira. I had no hope.”

When he was 7-years-old, Daniel was arrested and taken to a nearby child detention center. “A police woman told me that there was a programme for me. That was my first contact with psychosocial support.” He was to be released from the remand home on the condition that he attend psychosocial training. “What I loved most was the new friends I made – after losing my dearest ones. Boys and girls shared their stories. I pitied them. We were all in the same boat.

“As part of the training, I was told to set a goal,” he continues. “Something I could achieve within three months. I chose to stop stealing and behaving badly.”

During this time, Daniel was re-integrated into school and at night he attended psychosocial sessions. After class, he would return home to a small house where his assigned caretaker lived. There, each night, he would fetch water and clean the kitchen of the restaurant she owned. “In return for food and accommodation, I helped her with the restaurant and housework. Life was good.”

Meanwhile, his social workers monitored his progress. At school, Daniel was excelling. He even sat for his Primary Seven exams early. “Through all this I reconnected with myself. I came to realize what I was worth, what I was capable of. Without this support, I would not be who I am today. I lost the friends I met on the street – many turned to gambling during this time, some were recruited as child-soldiers, and some died. I could have easily gone down that path.”

“Throughout my childhood and development to date, I have applied what I learned through the Mental Health training: how to control my behavior, solve conflict and relate well with adults. The beauty is that I was able to rediscover my own worth and inner strength.”

After finishing his BA degree at Gulu University, Northern Uganda, Daniel found work with Feed the Children-Uganda, War Child Holland, and the United Nations High Commission for Refugees (UNHCR) in programs that offered psychosocial support and Child protection for children.

“I was working for the UNHCR when I was severely injured in an accident and needed someone I could trust and talk to. I met Pat Omidian at a point when I felt like giving up. I had suicidal ideation and was mixed up. I wrote to ten organization’s providing mental health and none got back to me except for Pat. She walked me through my life’s journey and I was able to start refocusing my life.”

Daniel’s personal and work experience led him to dream about a program for young children (ages 6-12). He found that most humanitarian agencies in emergency settings focus on material and physical support for families, with programs geared to adults and older children. Projects seldom address psychosocial issues and generally leave out the needs of children below the age of 10 years.

When Daniel learned of Focusing Initiatives International through Pat, he saw an opportunity to fill this gap. He imagined a project prioritizing emotional stability and peace of mind that would enable children, youth, and caregivers to recover and lead a normal life.

“A Better World For Kids is a reflection of how I could have recovered faster if I had received better support at earlier stages of my life’s challenges.  That is why we need to support the children affected by war.”

Daniel is passionate about protecting children in conflict-affected areas from any form of harm or abuse. “I was lucky. I came across some good-hearted people who made me realize that I was somebody in this world. That there were people who mattered to me. As a tribute to them, my dream is to make life better for the next generation.”