A long time ago there was a family living alone in the middle of a forest. There were two children, a boy called Baba and sister whose name was Nyasha.

After some time both parents died and the two children went looking for a place they could live in another area.  They found a cave in a rock, which was just the right size to use as a house for the two of them.

Baba went out to go hunting and also to look for food, while Nyasha’s job was to cook and do other domestic work.  Whenever he came back home there was a particular song he would sing and his little sister would recognize his voice and open the door to let him in.

This was the song Baba sang to Nyasha: “Open the door for me, my sister.  I have a rabbit, oranges, and rice.” And the sister could open the rock.  They loved each other and took care of each other.

But while this was happening, there was an animal in the forest listening.  This animal had come to love Nyasha.  And every time the boy came home after hunting and sang his song, little did he know that the animal was also listening. 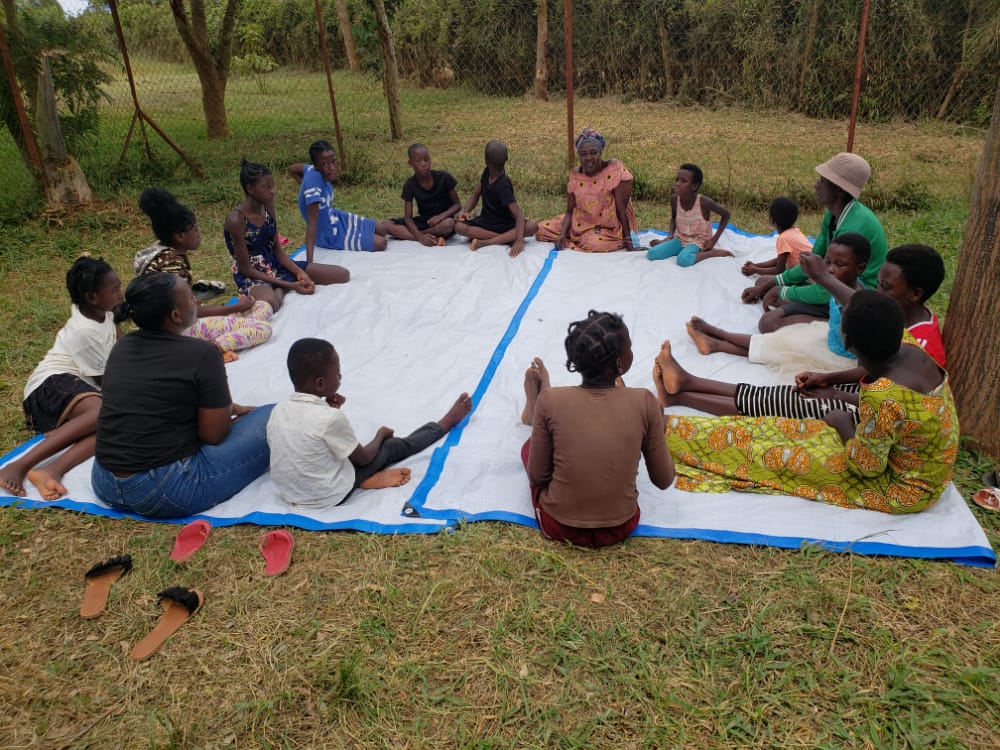 One day while the boy was out hunting, the animal came and tried singing the same song that the boy sang.  But he got some of the words wrong, and Nyasha knew her brother’s voice, and hearing a strange voice instead of Baba’s, she refused to open the door.

The animal went and hid in the nearby bush in order to listen more closely to the song. As the boy approached home that evening,  little did he know that the animal was nearby and was listening closely to learn the right passwords and how to imitate Baba’s voice when he sang the song.

The following day when the boy was away the animal came and song the password song properly and Nyasha opened the door.  The big animal scared her and she started to scream.  But the animal said, “I come as a friend, not an enemy.  I am lonely and would love to be your friend. Will you please come with me? I won’t harm you.”  So the girl followed him into the forest.

When Baba came back  home that evening, he sang the song as usual, but the door was not opened. He pushed it open, only to find his little sister was missing.  She had told him that someone had tried to sing the password song, so he went out and started searching, following her tracks, and the animal’s tracks, into the forest.

Eventually he came upon the animal lying under a big tree and  asked, “Where is my sister?”  When the animal refused to respond, he threatened to cut him into small pieces if he didn’t tell him.  So the animal said she is cooking food in my house, and led Baba to his sister.

Baba took Nyasha back home and commanded the animal never to look for his little sister again.

The animal felt sad, but left them alone after that.

✓ To take care of our siblings